Welcome back, Patch 4.15 features more class rebalances, our 2019 Halloween Event, a massive network revamp, several bug fixes, and much more! To keep up with all the latest details, make sure you frequently check out this site and visit our Discord Server!

Patch Notes may be updated at a later time to reflect things we've previously missed in our first iteration.

Our seasonal event has started this year! You can check it out by clicking this text here. 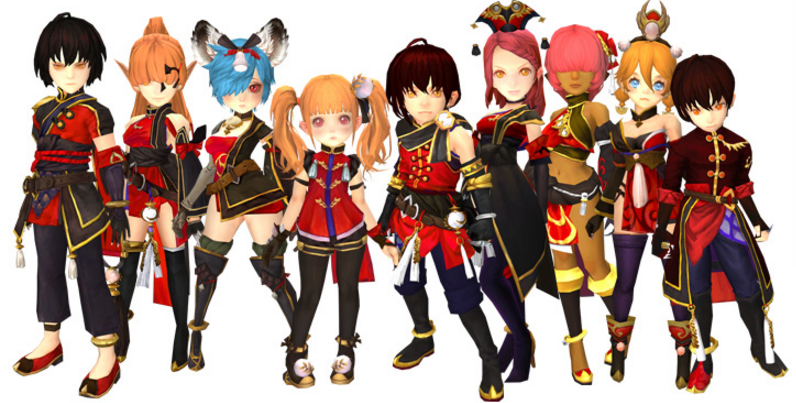 This year we're featuring the Rajuul set, which was released on official servers in 2015. The method of acquiring costumes will be different this time around. Here are the steps you must follow:

With Patch 4.15 comes a massive revamp for Infinity Nest's network infrastructure. As such, you should expect frequent soft disconnections, and possible server crashes. It is essential that we hold a public test for such a rework as it's near impossible for our staff (which consists of a few people) to fully test it. In this kind of test, we actually want the servers to crash, so that we can properly identify and fix the root cause.

We've stripped the original code that Dragon Nest uses and we're trying our own code out, which should have noticably different effects. All users should notice a general performance improvement.

This is a short summary of some major changes you'll notice in-game:

Some of you may be wondering things like why is Physician's healing so bad compared to LF, or why is Saint's healing so good but their party buffs so lacking compared to LF and Physician. This is because we are setting up Saint to be the main healer on IDN. Physician and LF will be taking the roles of secondary healers, however they still can solo heal all normal content. We have designed healers this way for future custom content, where Saint will be highly vital to success, or an extremely skilled duo of Physician/Light Fury.

Here at IDN, we vastly prefer to buff other classes instead of outright nerfing everyone to feel as miserable as the lowest DPS class. As such, we tend to buff classes that are represented the most, as those are the classes we have the best metrics on. We also consider what role a class is before we change it that much, such as Guardian being a tank, Saint being a support, or something like Barbarian being a DPS. Hence why some of you may feel ignored about classes in certain roles, but we cannot buff everything all the time, or we'll just introduce a major power scaling issue, we don't want a Guardian (tank) doing as much DPS as a Gladiator (DPS).

All of that being said, we cannot adjust classes without feedback, so please leave your thoughts in a well articulated format in #class-discussions so we can easily understand what you want. But do please understand that there is a possibility we may not agree with your ideas.

The 2019 Halloween seasonal event has started! Take a look at it now!